Skip to content
By Anni Tamminen ~  Anni is a dedicated yoga student, friend and AYP photographer!  She wrote this beautiful synopses of Ashtanga for the teacher training so I wanted to share it with everyone.  Thanks Anni!
Answering the question ‘what is Ashtanga Vinyasa Yoga’ is not necessarily as simple as one might initially think. Or, at the same time, it can be incredibly simple, depends on how you choose to look at it; coincidentally this scale between simple and sophisticated also exists in the practice of Ashtanga yoga. I find this variety to be one of the most beautiful things of the practice as it really shows how anyone can find something in it for themselves. It also explains why even after years and years of practice Ashtanga never gets old, never gets boring; there is always something new to learn if you so wish.
But to start to unravel the concept of Ashtanga yoga, the most common way for most people to approach it is through the asana practice. This part of Ashtanga is what is generally understood when someone says they ‘do yoga’. A series of postures executed always in the same order, movement joined and coordinated with a specific breathing technique called ujjayi and fixed gazing point are the cornerstones of the asana practice. For some the repetition can sound boring – always doing the same thing? – but I find it to be extremely useful. When you always do the same thing you eventually start to notice the subtle differences in your body and mind; the asana practice creates almost like a controlled environment where you can tune into yourself and really notice what is going on, thus giving the opportunity to observe yourself in a very unique manner. Not to mention that as you practice more and move further along in the series the physical effort required is something that teaches you concentration, humility and patience in a way simply intellectual or theoretical approach couldn’t.
This is not however all that Ashtanga has to offer. The physical asana practice is only one eighth – or one of the eight limbs as it is traditionally called – of the Ashtanga system. It may happen that after some time of practicing the asana you get intrigued about the other seven limbs – this is what happened to me at least. The other limbs are divided into two ‘categories’; five in the outer limbs category and three in the inner. In addition to the asana, in the outer limbs, there are also a set of moral disciplines and observances called yamas and niyamas that give guidance in how to relate to the world and to yourself, breathing techniques called pranayama and a practice in sense withdrawal (and thus concentration) called pratyāhāra.
These five limbs are not there to be restrictive or make you feel guilty if you fail to live by them; for me the effect of studying and thinking about them has been quite the opposite. And the increased consciousness of my thoughts and actions I have gained through that, has only served to enable me to live in more peace with myself and thus with the world around me.
When you practice Ashtanga you don’t HAVE to live according to these principles or follow certain practices. I don’t think there can be such a thing as ‘have to’ when it comes to practicing yoga – you either want to do it or you don’t do it. But somehow, and I am still not quite sure how this mechanism worked on me, through the physical asana practice you naturally start to gravitate towards them. Maybe you will never perfect them – I certainly haven’t – but I don’t believe that matters; I see these five limbs more as a tool to aid you to feel and live better in a more conscious way.
Ashtanga is not a competition or a ranking system, as hard as that may be for a western mentality to sometimes digest. Traditionally these five outer limbs are there to prepare the student for the three inner limbs – concentration (dhāranā), meditation (dhyāna) and the ultimate goal; samādhi. It is namely the last mentioned that is the real purpose of yoga – liberation of the spirit, transcendence of the ego, nirvana… There are many names for this but whatever it is called, it means gaining the knowledge of the true Self and the realization that what we consider to be the real world is just a product of our misconception, or ignorance. This concept is quite foreign for many people living in a Western society and can sometimes feel intimidating, or bear too much resemblance to a religion, but it is not the case at all. Maybe you will arrive there, maybe you won’t; you can only arrive to the place where you are supposed to.
So, if you look at the Ashtanga system as a whole, it is a profound system of evolution, at first physical but ultimately a spiritual one. It is multifaceted and offers an incredible amount of detail and finesse both on the physical and spiritual levels, so much so that it gives something new every day if you stay with the practice long enough. This is what I meant when I said it never gets boring; I have found Ashtanga to be a way to look at myself, my actions, thoughts and interactions in the world. As I am different every day so is my practice, and staying with the practice allows me to acknowledge this in a way that enables me to make changes to work towards a more peaceful existence. 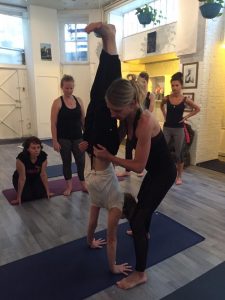 Anni can pretty much do this herself
but I was showing how to help someone.